Why Is OBS Not Recording Mic/Desktop Audio (6 Methods)

OBS is a great solution for those who yearn for perfect self-made recordings. However, trouble occurs to some users that OBS is not recording mic sound or desktop audio.

The OBS not recording audio issue is the stumbling block on the way to a perfect video. If you want OBS to become the stepping stone of your recording, check out the steps below to fix the issue.

All the recommended methods based on our full suite of tests are all positive for the OBS not recording audio problems. Now, let’s follow the steps to find out why and how.

Method 1 Modify the audio input and output device on OBS 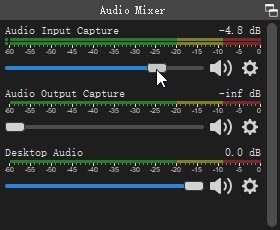 Here, you can use your mouse to drag the slider to adjust the volume of the two sources. Make sure you haven’t drag the two volume sliders all the way to the left, because that will mute the two audio source and OBS will not record the sound from a muted audio track.

If OBS is still not recording sound from the microphone, likely, that OBS cannot detect the default microphone. In this case, you need to add a new microphone source.

To add a microphone source, go to Sources on OBS, right-click on the area of Sources, and move to Add.

Here, you can choose to add Audio Input Capture, an option that OBS will catch the external sound coming from a microphone. 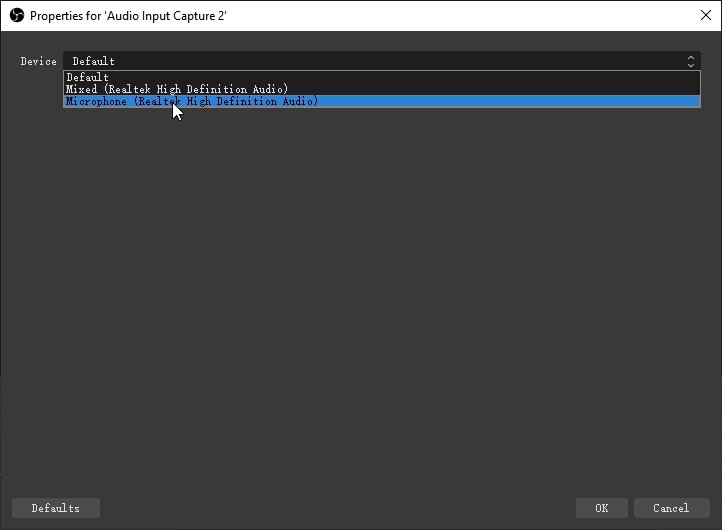 Choose a microphone device and click OK to confirm. You may go back to Audio Mixer where the new source will be listed.

Method 2 Unmute OBS on your computer

If your OBS is muted on the system, it cannot record any sound.

To find out if it’s muted, right-click Speaker on the bottom right corner of the desktop and select Open Volume Mixer from the drop-down list.

On the Volume Mixer interface, you will see several app audios on your PC. Check if OBS and System Sounds are muted or not, unmute them if they are. The two options decide whether OBS is allowed to record any audio on your computer. 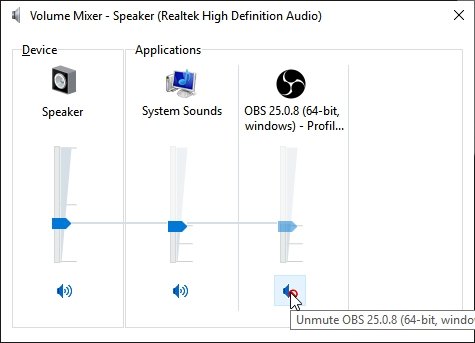 That’s because there’s already a default audio input/output device that supports recording. If you plug in a new one, your computer won’t set it as a default recording device automatically since there’s already one. What you need to do is to manually set up the audio device as default.

On your desktop, right-click on the Speaker, go to Sounds and move to the Recording module. 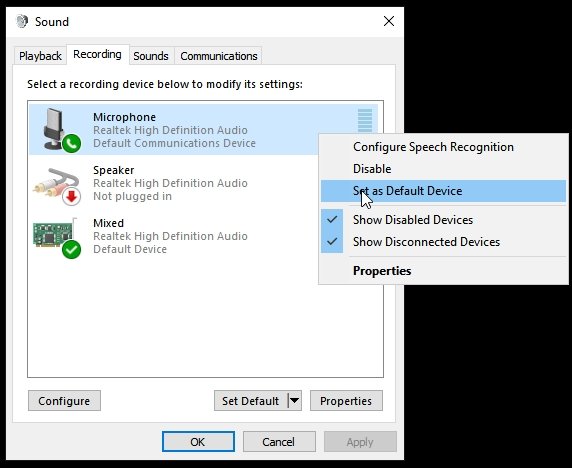 There, right-click on the device which you want to record a sound from, and click Set Default. Then, OBS is eligible to record sounds from this new default audio device.

Method 4 Remove Nahimic from your PC

Nahimic is an audio manager application that can help improve the audio quality of your PC. A lot of gamers use it to make a better sound for their games.

It does have a good performance in audio enhancement, but Nahimic can conflict with OBS. Your OBS is not recording since Nahimic has taken up the audio driver and layer that OBS needs. To fix the issue is very easy, just uninstall Nahimic.

On the Start menu, click Settings, and then go to Apps.

There, locate Nahimic and choose Uninstall. Nahimic will be removed from your computer in a few seconds.

After the removal, your OBS should record sound from both the microphone and the system.

If none of the methods can help you, your OBS is having an undefined bug, you can reinstall it.

Initially, uninstall it. On your desktop, click Start and go to Settings > Apps.

Then the uninstallation is complete, visit this page and install a new one on your computer.

When all the previous methods fail to solve the problem, just switch to an alternative screen recorder to create a video. Personally, Aiseesoft Screen Recorder will be quite good.

Aiseesoft Screen Recorder is known as one of the most powerful screen record software which is similar to OBS, it has very great performance in screen recording. Case in point, you can record a lossless video with lossless audio quality.

Moreover, the program is very easy to use which is quite different from OBS, the one that needs practicing. You can use the keyboard shortcut to start recording your screen without complicated settings.

If you hanker to have a flexible recording, Aiseesoft Screen Recorder will meet your need as well. You can decide the audio source and recording area manually with one simple click. No need to mention that all the shortcuts, properties of the output, and mouse movements are all adjustable.

To find out more, you can download the app yourself and start a recording.

All Apple devices are not allowed to record internal audios, including Macs, iPad, iPhones. Apple is trying to stop its users from doing unauthorized recordings on some protected items, like songs, and music on Spotify.

Such limitation is very inconvenient for Mac users when there are so many important audio playbacks on a Mac computer. For instance, the audio on a video meeting or chatting, the audio from a self-made demo, etc.

OBS is not recording audio? Now, the problem is solved. Hopefully, all the methods above get you out of trouble and you can create a perfect video with the desired audio. And never forget the fact that when the error remains, try an alternative like Aiseesoft Screen Recorder.