Summary: Quicktime can help, but it only offers limited options(Built-in Microphone and None) on what you can choose as the audio source when recording screen on Mac. It’s impractical when you try to use Quicktime to screen record with internal audio by raising the volume of the speaker, hoping the mic can capture the sound from the speaker. Thanks to Aisee, the best Mac screen recorder with audio, you can record both internal and external audio along with your Mac screen recording, without Quicktime.

Recording your screen with audio can be useful for many purposes — be it to create tutorials, provide technical support, share knowledge, record lectures, or onboard new employees. The trend of creating gaming videos has also gained traction in recent years.

You can record your screen with audio on a Mac or Windows quite easily with the help of a screen recorder. Several screen recorders are available online today, free as well as paid. The choice of which one is right for you can depend on a variety of factors. Some of these include:

While the above parameters focus on functionality, the software’s user interface is equally important. You want something that is user-friendly, especially as a new user.

Among the options available, we recommend Aiseesoft Mac Screen Recorder as a solution to record screen with audio on Mac. The software allows you to record your entire screen or an outlined area only. You can even highlight your cursor, which can be especially helpful in the case of technical support videos. You can also lock recording activity on a specific window so you can simultaneously work on a separate window.

The screen capture can be saved in various formats, including MP4, GIF, WMV, AVI, and MOV. Aiseesoft Screen Recorder also offers basic editing functionality, which saves you from finding another software for basic trims.

Screen recorders are quite easy to use. For the purpose of explanation, we’ll go through the steps on how to record the screen with audio on Mac with Aiseesoft Screen Recorder.

Step 3. Configuration before recording on Mac

At this step, you can customize the screen area you wish to record.

Set the Hotkeys and output formats from the Preference. 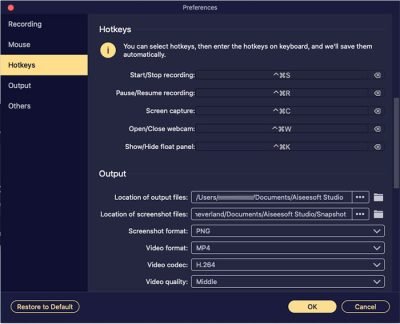 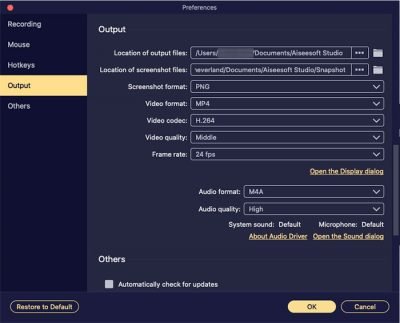 Step 4. Adjust the audio settings. At this step, you can either choose to record the system audio or the audio input from the mic.

Step 5. Hit the Record’ button to start your recording.

Step 6. When you are done recording, click the red square button to stop. Trim the screen recording with the built-in editing tool to make your clip looks more integrity. 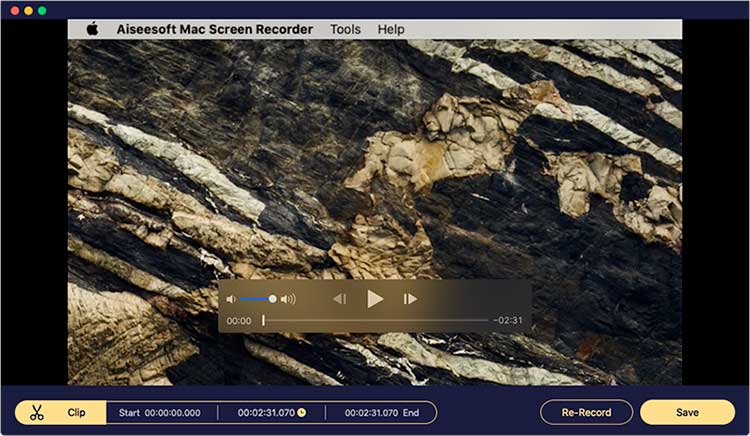 Common Problems: Things to Keep in Mind When Using a Mac Screen Recorder

If you set a low custom frame rate, the video won’t be smooth. Make sure you use 30, 45, or 60 FPS for a good viewing experience. In case you’re using the right frame right, but the video still stutters, try updating your OS, GPU drivers, and the recorder software. If the problem persists, it could indicate a hardware issue, a basic clean-up of the CPU can do the trick. The most likely problem could be an overworked system. Run your task manager to check how many programs are running and eating into your CPU usage. In case you’re still unable to fix the problem, your system is probably outdated and unable to deliver the required frame rate for the recording.

Tips for Screen Recording with Audio On Mac

It’s pretty basic to complete a Mac Screen Record with Audio once you’ve got the basics down. A few tries with the software should typically get you up to speed.