Developed by Blizzard Entertainment, Overwatch wins the world’s preference that the mass media have considered it the greatest team-based first-person shooting video game.

It’s very easy to do so, here, I will show you 3 very easy ways to record Overwatch gameplay. You may choose one and start to record your gaming moments.

1. How to record Overwatch with Aiseesoft Screen Recorder

Aiseesoft Screen Recorder is famous for its duality of simplicity and unequaled recording performance. With the program launched, you can simply use the one-press shortcut to record your Overwatch gameplay without complex preset or operation.

Besides, supporting adjustable configurations, you can decide nearly everything about the output file, such as the quality, format, audio source, and frame rate of the video.

Low CPU usage, hardware acceleration, clipping ability are also very a few among the numerous reasons you should make use of Aiseesoft Screen Recorder.

Tip: Click the buttons and start to record your Overwatch gameplay for FREE now!

1. Launch the program on your computer and choose Video Recorder on its interface to record your Overwatch.

2. On the Video Recorder window, click Full to take a full-screen capture or click Custom and choose to record the gameplay window only.

3. Keep the System Sound option on.

Note: If you plan to record the microphone sound which may be the conversation between you and your teammates or your self-made commentary, turn on the Microphone option.

4. Minimize the app window after deciding the audio source.

5. Launch your Overwatch and start a battle, then, press Ctrl + Alt + S to initiate a gameplay recording.

6. To stop the process, press the same keyboard shortcut.

7. On a pop-out window, preview the video and clip it if you want. Click Save and output it to a custom destination. 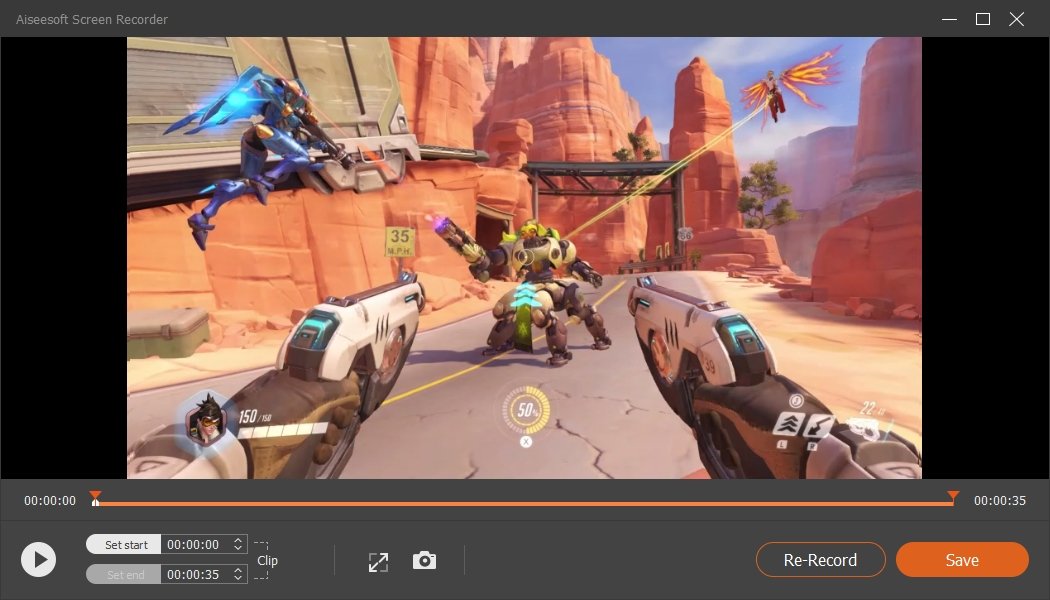 Eventually, you can find the video on the folder that you choose and you may share or edit the video with your preference later.

2. How to record Overwatch with OBS Studio

OBS Studio is a powerful open-source screen recorder. Currently, it’s one of the most popular screen capture programs which has been used by countless users from around the globe, including some YouTube celebrities and game bloggers.

Programmed as a professional screen recording and live streaming tool, you can use OBS to record all your on-screen activities or broadcast your onscreen actions. 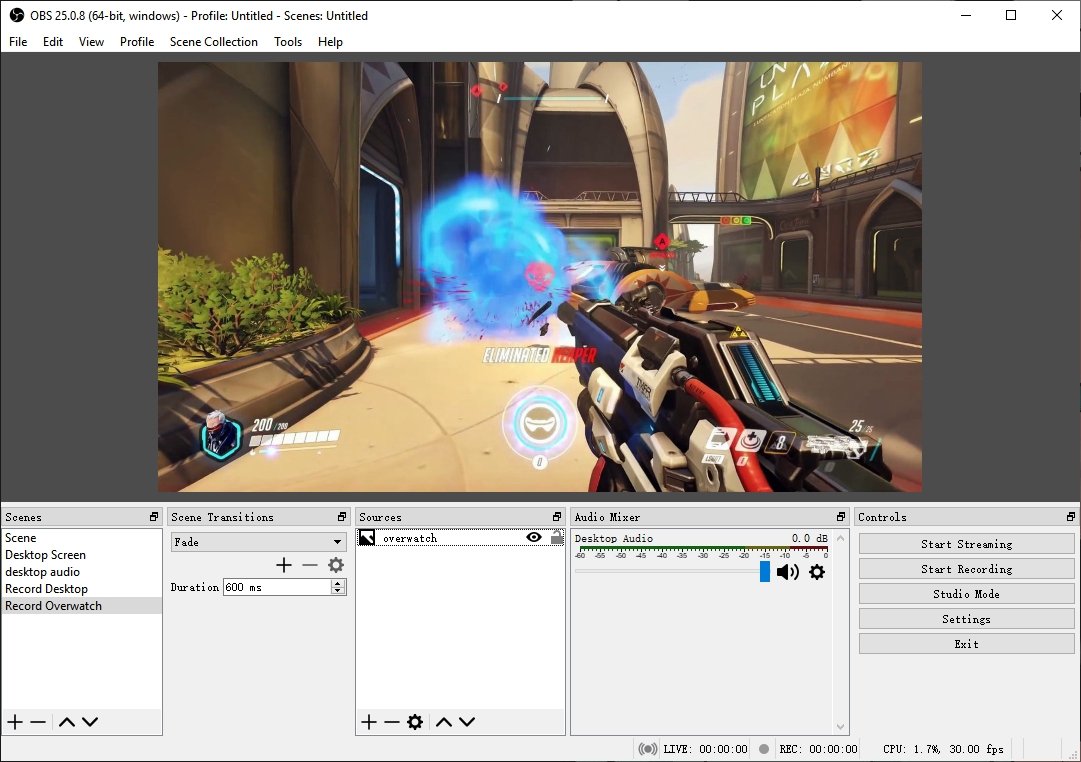 Offering multiple custom settings for video-audio, before you use OBS to record your Overwatch gameplay, you can decide many properties of your video, including audio mixer, format, bit rate or resolution, etc.

If you want to do live streaming, you can use the OBS Studio Mode to make a perfect broadcast.

With Studio Mode on, you can preview the footage before it goes to air so that you will know if there’s anything inappropriate to show and you can improve the streaming quality.

Though OBS offers an incredible recording feature, you need to set up a lot of configurations before you initiate a recording. For instance, you need to add a new scene and new sources beforehand to enable OBS to record the content you desire.

Also, If you want to record your Overwatch gameplay in 1080P/60fps with no lags, you need to prepare yourself a very high-end computer with an unstoppable CPU and GPU.

3. How to record Overwatch with NVIDIA ShadowPlay

Published by NVIDIA, ShadowPlay is a powerful screen recording tool with no doubt. It’s perfectly designed for gameplay recording, once it’s installed, you can record your gaming moments and make a video with absolute satisfaction. 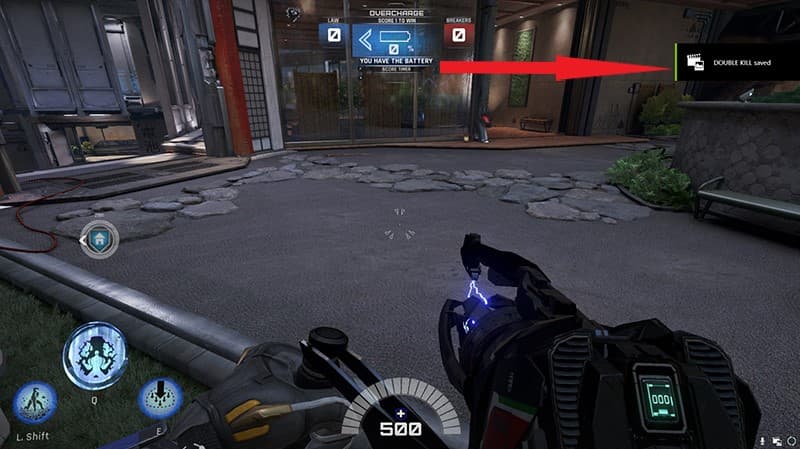 ShadowPlay offers you the availability to record a 4K long video with shortcuts, and an instant preview feature is offered as well.

In particular, you can find great convenience from a brilliant functionality – ShadowPlay Highlights.

To capture all the amazing moments, like kills, wins, and defeat, you can turn on Highlights on the program.

Since then, ShadowPlay will detect your gameplay process and automatically capture all wonderful gaming achievements. You don’t need to worry about missing those spectacular gaming details.

How to record Overwatch with ShadowPlay Highlights

Step 1 Launch ShadowPlay on your computer and locate Settings. 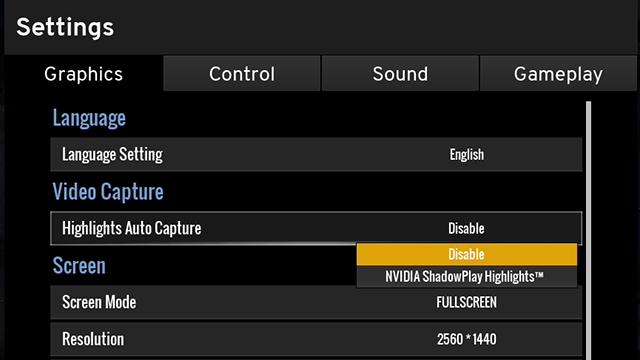 Step 3 Launch your Overwatch and click YES on a pop-out notification.

(Note: If you don’t see any pop-outs, press Ctrl + Z on your keyboard to activate the in-game Highlights feature.)

Step 4 Start a battle and just show the best of yourself, ShadowPlay will capture all the great moments automatically.

You can find out more details from the chart below.

Here are the details of the 3 best game recorders to record your Overwatch gameplay.

If you want to save time and energy, Aiseesoft Screen Recorder will help you record a decent gaming video.

And OBS can help you record a video with multiple professional configurations, but you need to spend some time and take practice to figure out how you can use it properly.

As for ShadowPlay, pick it when you don’t want to miss any shining point on your gameplay.