Blu-ray Disc (BD), as the most advanced storage format for digital optical discs, supersedes the DVD format and is most commonly used for high-definition (HD) video playback and high-density data.

Though Blu-ray technology is appealing, it’s unfriendly for those who are new to it since there’re so many Blu-ray types on the market, which you will always see some “BD-25“, “BD-50“, “BD-SL,” and “BD-DL” on the surface.

These tags indicate the layer (where the disc will store data) and capacity (GB) of the disc. Depending on your need, you can pick up the right disc with those tags.

Also, you will find some skills for choosing a suitable Blu-ray disc and creating your own Blu-ray.

Part 1: How many layers of data exist on a single side of a Blu-ray disc

Part 2: How to create your own Blu-ray movie disc 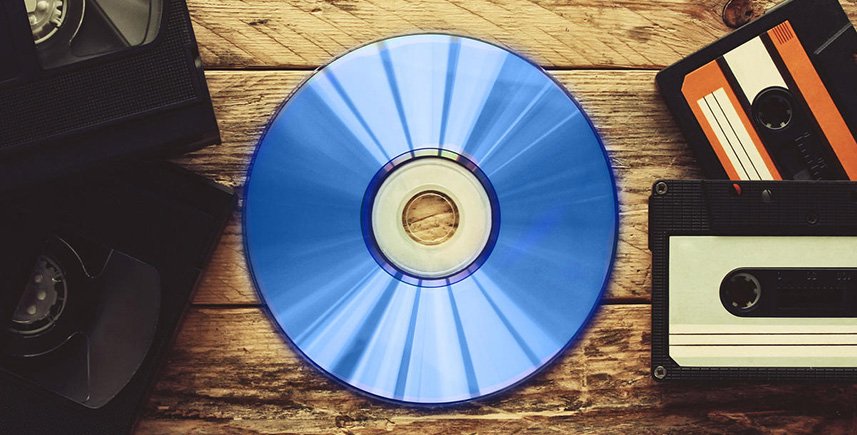 Part 1: How many layers of data can exist on a single side of a Blu-ray disc

First of all, a Blu-ray disc has two sides and what we are going to focus on here will be those single-sided discs since the two-sided ones are hard to get and difficult to use.

And how many layers can exist on a single side of a Blu-ray disc? The maximum amount is 4.

So, in conclusion, there can be 4 layers of data exist on a single side of a Blu-ray disc. And of course, there can be fewer layers as well, from 1 to 3.

Depending on the layers, we label different Blu-ray discs:

In the following section, let’s take a look at their capacities separately.

How much data can a Single-layer Blu-ray Disc store

Officially, a single-layer Blu-ray disc (BD SL) can hold 25GB of data theoretically and that’s why you can see a tag “BD-25” on a BD-SL disc. That tag stands for the capacity of the disc.

However, some of the space of the disc is reserved for the file system which occupies 1.7 GB, so the exact capacity of a single-layer Blu-ray disc is 23.28GB.

As the same rule, its true capacity is 46.57 GB excluding the file system reserved space. With that, it can hold 270 minutes of high-definition video. 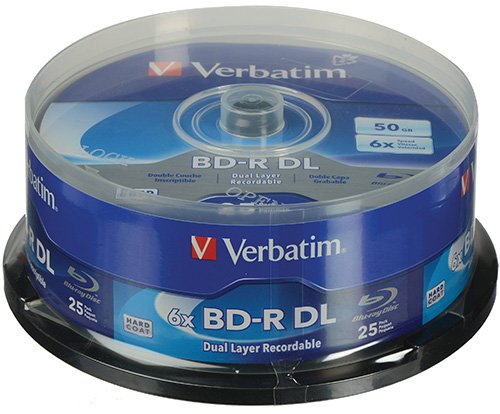 How much data can a Tipple/Quadruple-layer Blu-ray hold

As for the BD XL discs, the capacities go as follows. 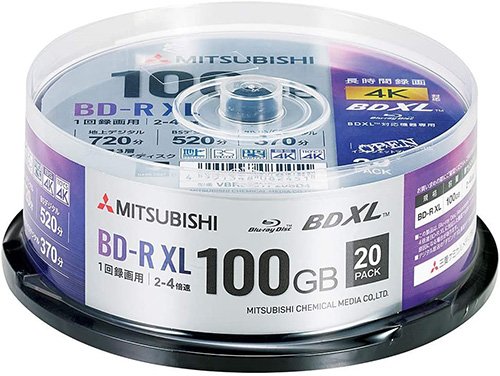 Part 2: How to create your own Blu-ray movie disc

Now that you know the capacities of each Blu-ray disc, do you want to buy yourself a disc and start burning your files to it? If you’d like to, follow the tips below to create your own Blu-ray disc.

How to choose a suitable Blue-ray disc

To choose a Blu-ray disc, you need to think about two things: Capacity, Writability, and brand.

In Part 1, we’ve discussed the exact numbers of data of those Blu-ray discs can hold. So, take a look at your source files, choose a disc that is capable of holding your files.

So, if the size of your file surpasses 50GB, get yourself several BD SL or DL discs instead of a BD XL.

Besides capacity, Blu-ray discs can be classified by writability. For example, some Blu-ray discs (BD-ROM) support only reading while some (BD-R/RW) support burning files into the discs.

To create a Blu-ray disc, you have to choose a BD-R or BD-RW disc.

Who makes the best Blu-ray disc? Well, there’re so many brands you can choose from, like Sony (the joint-inventor of Blu-ray), Panasonic, Verbatim, etc.

You can go to local stores or go online (Amazon, BestBuy, or Official site) to get some.

How to burn your files to a Blu-ray

To create your own Blu-ray movie, you need a Blu-ray creator program installed on your computer. In this case, I think the echoshare Blu-ray Creator might help you with that.

Being a nice choice for home-based Blu-ray makers, echoshare Blu-ray Creator has always been a considerate helper that never lets its users down. Programmed with so many advanced technologies, this creator can surely help you make a movie disc like a pro.

Make your own Blu-ray collection

Supporting 1080p resolution and Dolby 5.1 surround sound, you can, with no doubt, enjoy the lively frames and crystal clear sound of your own creation with pillows, couch, drinks, soft light, and your loved ones.

Personalize the disc with your preference

How to make your Blu-ray movie theatre class?  Give it a Menu. You can choose a provided menu from echoshare or create one by adding your favorite picture and music. 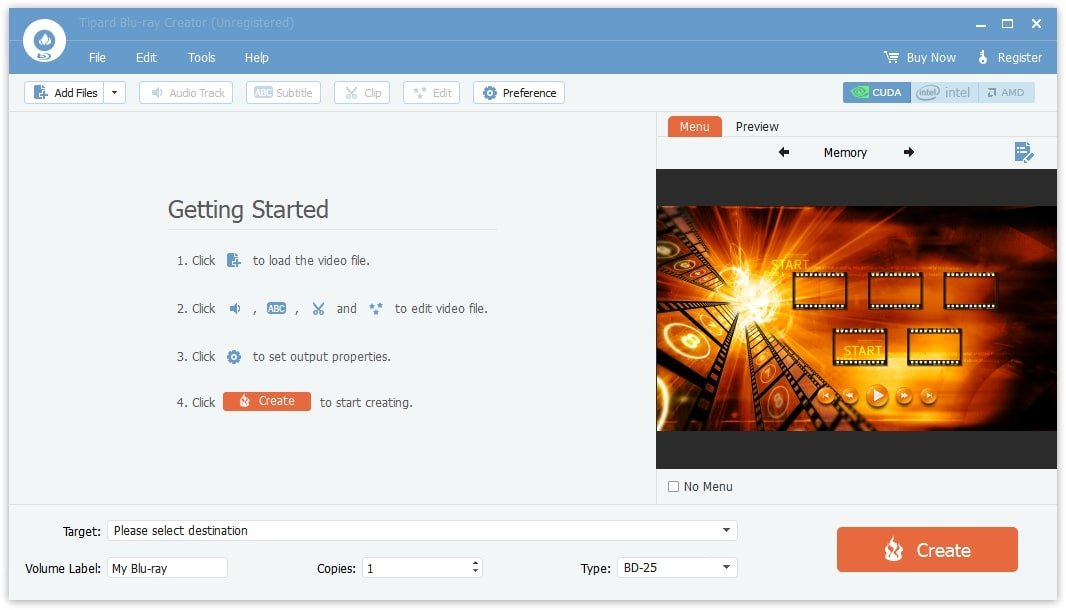 Want to become a pro? Download this BD creator on your computer and let’s go.

Step 1: Launch echoshare Blu-ray Creator and insert the Blu-ray disc into the disc drive of your PC.

Step 2: Drag your movie or click the Add Files button to import the target file to the program.

Step 3: Click on Audio Track and Subtitle to modify them.

Tip:You can click the Edit button to adjust the effect of your movie, like the brightness, hue, contrast, and stuff.

Step 4: Create a menu for your disc. You may choose a template or create one by yourself. Of course, you can tick the No Menu option to make your disc simple. 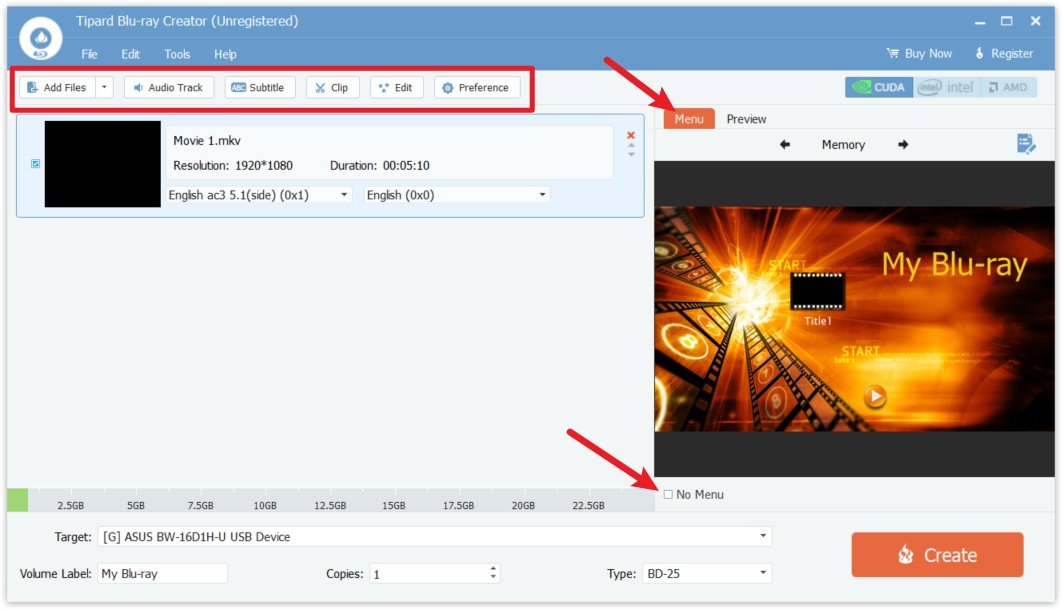 Step 5: Hit Create to start burning the movie to your Blu-ray disc.

In just a few minutes, you’ll have your Blu-ray disc completed. Pop it out and save it on a disc case. Enjoy your time with the disc then.

Is it worth buying Blu-Rays?

Definitely! Blu-ray discs are worth buying because of their guaranteed quality. You can keep the disc for a long time, and it also comes with a digital copy.

How many TV episodes can you put on a Blu-Ray?

In the future, by adding more layers to the disc, the storage capacity of Blu-ray discs might increase to 1000 GB or 1 TB. Whatever development it might be, echoshare Blu-ray Creator is the best tool you can use for your Blu-ray Creation projects.