How to Play Blu-ray on Nintendo Wii with Easy Steps

Though the Nintendo Wii game console is no longer the first choice for many game fans to play video games, it’s such a waste to just leave the device there and do nothing about it.

To reuse the Wii game console, a lot of Wii owners are trying to play some movie and music discs, like CD, DVD, and Blu-ray, on the device since we’re available to play a game via a game disc on Wii.

The idea of making use of Wii raises a problem: Can you play a Blu-ray on Wii?

If you cannot, why can’t you? Or if you can, then how to?

To help you find the answer, this post will tell you the feasibility of Wii playing Blu-ray and how exactly can you play a Blu-ray movie on Wii.

Can Wii Play a Blu-ray disc?

To be clear to you all first, a Wii cannot play a Blu-ray disc directly. You insert a Blu-ray disc into the disc tray on Wii, nothing is going to happen. No video, no music, no nothing.

Though Wii cannot play a Blu-ray disc directly, there’s still one way to watch a Blu-ray movie on Wii – convert the Blu-ray disc into a Wii-compatible file.

Convert Blu-ray disc into digital files to play on Wii

Take a look at the back of your Wii. Can you see two USB ports there?

The USB ports are the key that you can play the Blu-ray movie on the console. This is the idea works:

Sound nice, right? Let’s see what you’re going to need for the process.

Prepare these before digitalizing your Blu-ray disc for Wii

The coming 3 things are necessary for you to play a Blu-ray movie on your Wii. Make sure you get all the stuff ready.

Take out your Blu-ray disc. Make sure it’s still playable by check the possible scratches on the surface, bending, or fading. 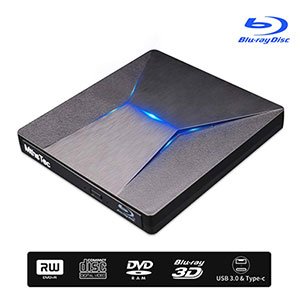 To digitalize a Blu-ray disc on a computer, you need to install a Blu-ray player to your computer via the USB port first. Maybe, you’re lucky enough to purchase a computer that has a pre-installed Blu-ray drive, you may skip this.

To protect the disc content from piracy, disc producers applied some DRM (digital right management) methods to most Blu-ray discs. In other words, you cannot drag and drop the Blu-ray movies onto your computer hard drive.

Luckily, some geeks have already cracked all the DRM and we’re available to copy and convert a Blu-ray movie with the professional Blu-ray ripper software.

Among all Blu-ray ripper tools, there’s one you should never miss, the Tipard Blu-ray Converter.

This Blu-ray ripper software can easily bypass Blu-ray DRM methods and rip the Blu-ray content from a disc into digital files. 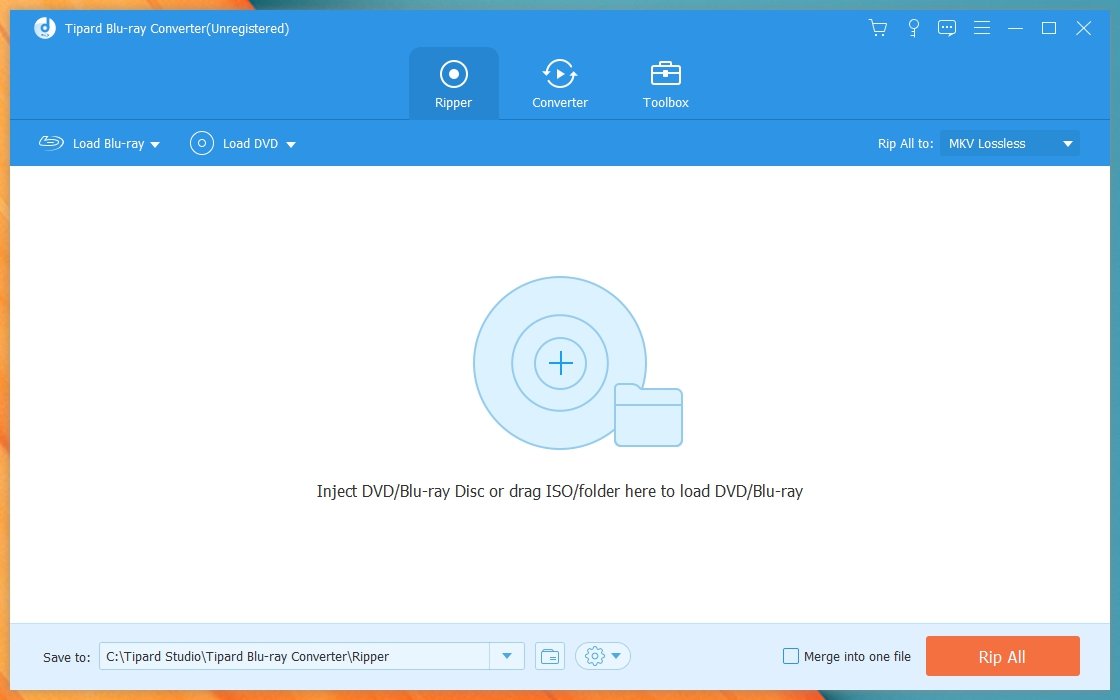 If you’re interested in it, download the program onto your PC for free and start to rip your Blu-ray disc for Wii.

Steps to play a Blu-ray on Wii

In this section, we’ll be seeing the whole process of playing a Blu-ray disc on Wii. Let’s get started.

On its interface, click the big blue round button in the middle. Tipard will detect the disc and analyze the contents inside. 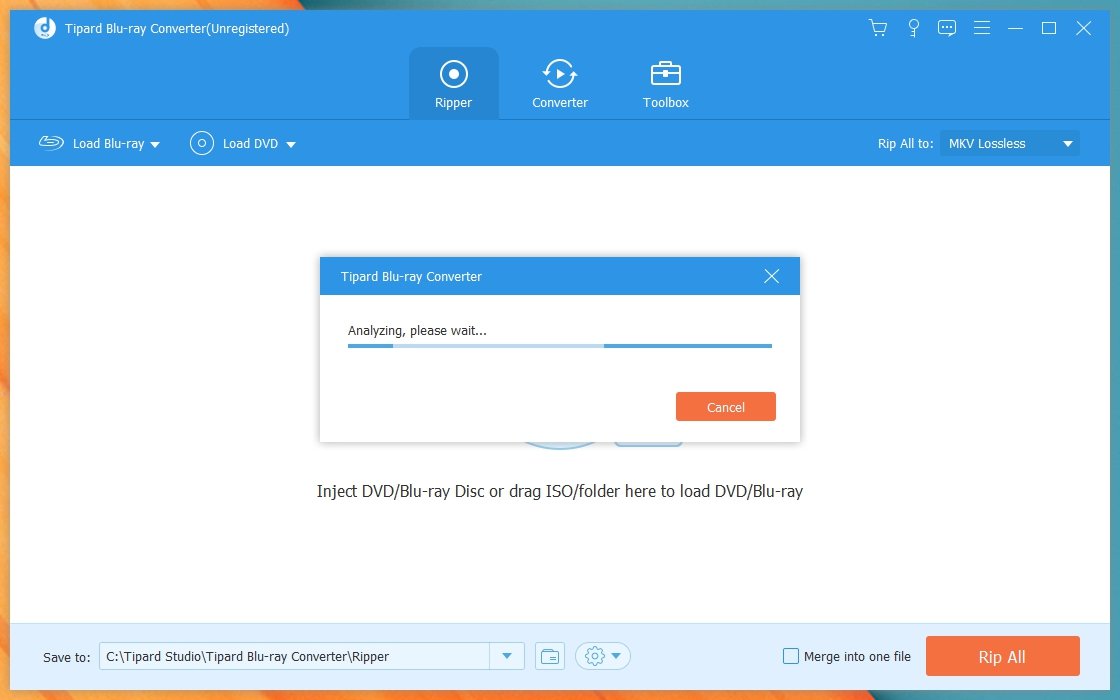 When the analysis is complete, the program will display the main movie of this Blu-ray disc on the interface. 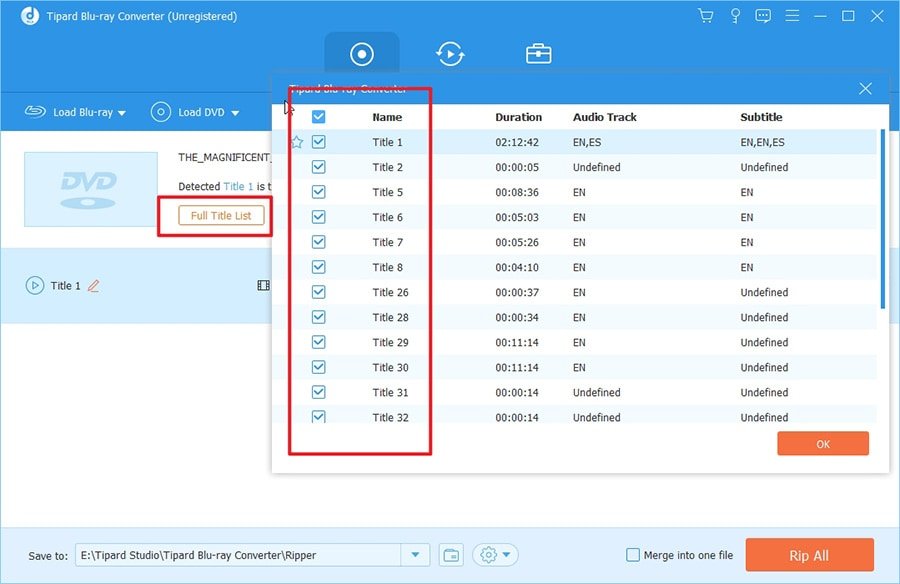 Then, click Rip All to and decide the output format. 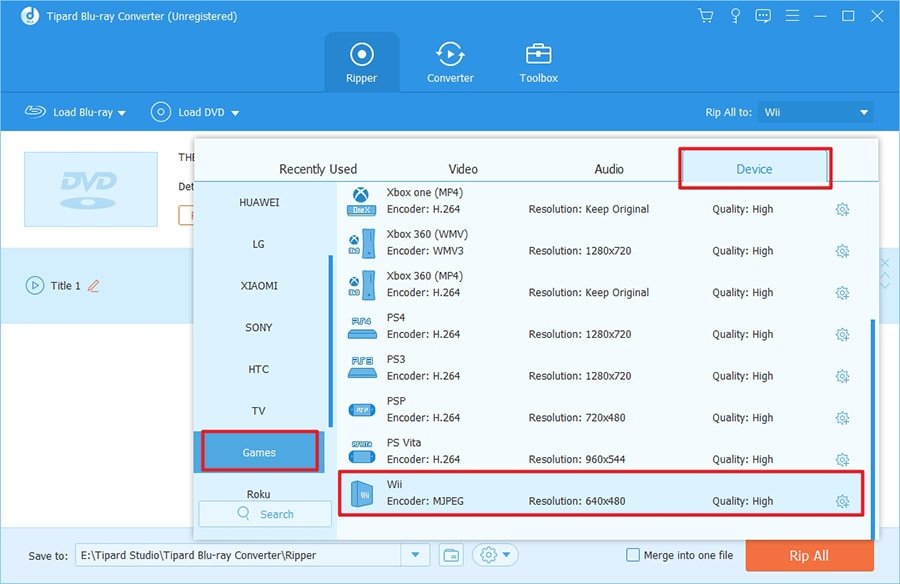 Next, for a disc that contains multiple audio tracks and subtitle channels, you’re available to choose one to tip with the movies.

Now, take out a USB drive and connect it to your PC.

Back to Tipard’s interface, locate Save to and set the destination as your USB drive. 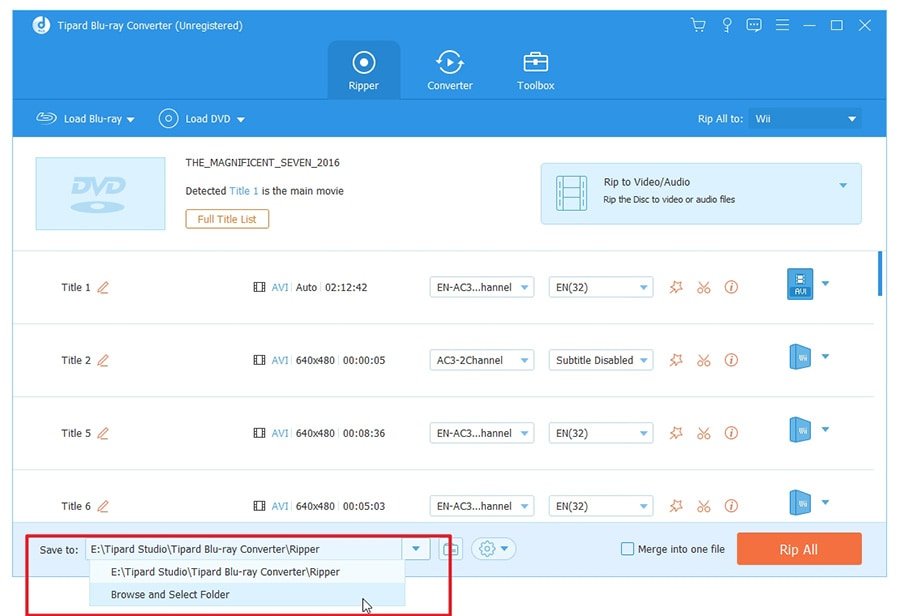 In this way, Tipard Blu-ray Converter will rip the Blu-ray disc as files into the inserted USB drive.

As everything is ready, click the Rip All button to start. Tipard will work to rip the Blu-ray discs based on the setup.

Step 3 Play the Blu-ray on Wii

You may visit the USB drive to preview the Blu-ray movie(s) after the process is complete.

Connect the USB drive to Wii and play the Blu-ray movie. Have fun with the motion picture.

FAQs for Wii, Xbox, and PlayStation

Same as Blu-ray disc, a DVD cannot run on Wii as well. But we can rip the DVD as digital files to play on a Wii.

Xbox One surely can help you play DVDs as long as the game console and the target disc share the same region code. To find out more details, read this: How to Play A DVD on Xbox One?

Unfortunately, Xbox 360 does not support playing Blu-ray discs directly. Nothing is going to happen when you insert a Blu-ray disc into the game console. But still, you may find a way in the following post to watch a Blu-ray movie on your Xbox 360.

A PlayStart 4 can play Blu-ray discs for sure. Want to know more details, read this: Does PS4 Play Blu-ray Disc? Sure! This is How.