How to Convert MP4 to Blu-ray on Windows & Mac

There’re so many remarkable moments that we want to record and cherish. With a smartphone or camera, we can shoot an hour-long MP4 video to record some big moments, including a wedding, an anniversary, the kid’s school play, the graduate or entrance ceremony, etc.

Also, when you download some MP4 movies online, burning them to a Blu-ray disc is a good idea to save your computer hard drive.

And if you’re one of those talented creators that just made a movie or animation video in MP4 format, you may produce your movie disc that looks like a pro with the video.

To help you burn the MP4 video to a Blu-ray disc, today we’ll be discussing the preparations and steps of the MP4-to-BD conversion.

What you need to burn MP4 files to a Blu-ray

To burn MP4 to Blu-ray, you need to get these things ready first.

Naturally, you need a suitable Blu-ray disc to hold the MP4 video. And note that there’re several types of Blu-ray discs that have different capacities. Case in point:

Caution: Most Blu-ray player and drive only support to read BD-25 and BD-50. One that plays BD-XL will be, no doubt, more expensive.

Besides the capacity of the disc, you should also pay attention to the Recordable and Erasable features of the disc you pick up.

So, based on your need in capacity and recycle use, pick up the right Blu-ray disc. 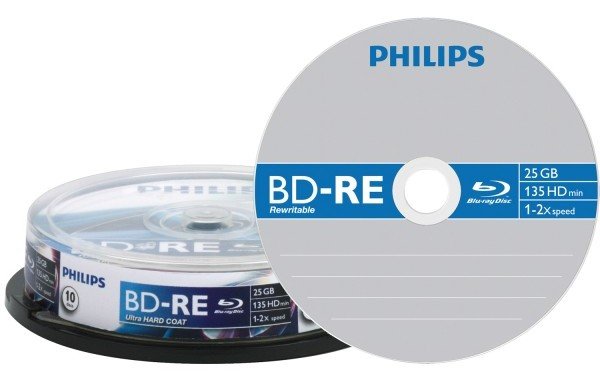 2. A Blu-ray drive for your computer

There’re 2 types of Blu-ray drives, one is internal and the other is external.

For Mac users, I guess an external Blu-ray drive is the best choice for you since most Macs won’t allow users to insert anything into the motherboard.

In this case, you may read this to locate a BD drive that helps you burn MP4 to Blu-ray: Best Blu-ray Drive for Mac Computers.

And it’s OK for Windows users to use both of these BD burning drives. If you have no idea how to choose a dream Blu-ray drive, read here: Best ASUS Internal/External Blu-ray Drive for Computers.

Whatever files you plan to burn to a Blu-ray disc, a professional Blu-ray burner is always the must-have software. You may find a lot of software on the market and one of the leading figures is the Leawo Prof. Media.

Being a Blu-ray expert, the Leawo Prof. Media is a universal utility to rip, burn, copy, and create Blu-ray discs without quality loss.

How to convert MP4 to Blu-ray disc on Windows & Mac

As you get the above 3 things already, we can start to check out the steps of converting MP4 to a Blu-ray disc.

Step 2 Load up the MP4 video

On your computer, launch Leawo Prof. Media and choose the Blu-ray/DVD Creator mode on its interface. Then, locate the MP4 video and drag it to Leawo, release it. 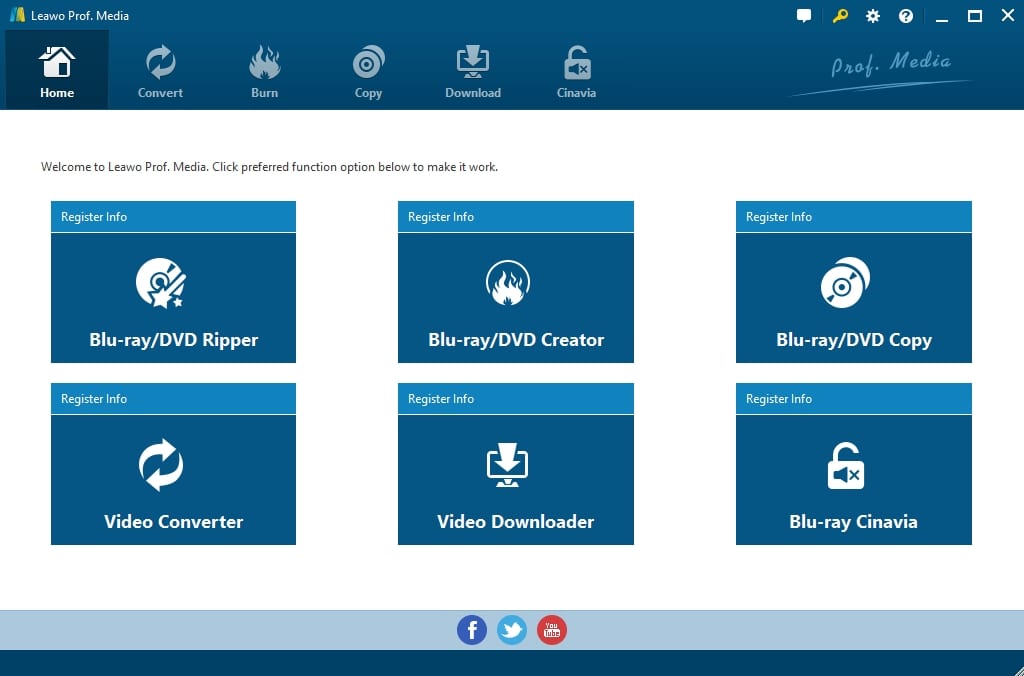 Leawo will start to analyze the file and display it on the interface.

Next, you may edit and trim the video with Leawo’s in-app video editor. Right-click on the video icon and choose Edit.

Then, you’re available to: 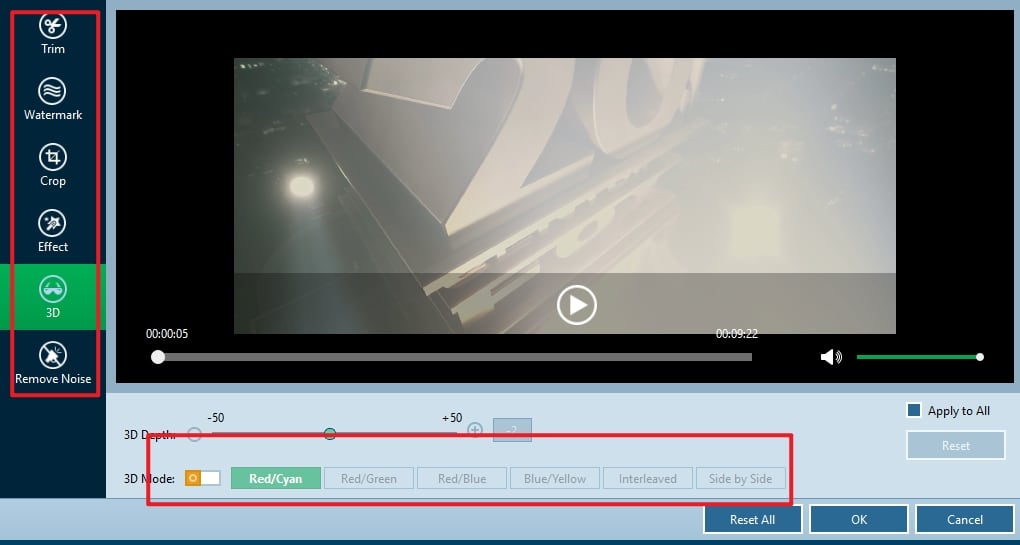 Click the OK button to keep on burning the video.

Step 4 Design a Menu for the movie Blu-ray disc

Then, take a look at the right of the program and choose a template for your disc Menu. Not fond of any of them? Click the Online or Custom to personalize one. 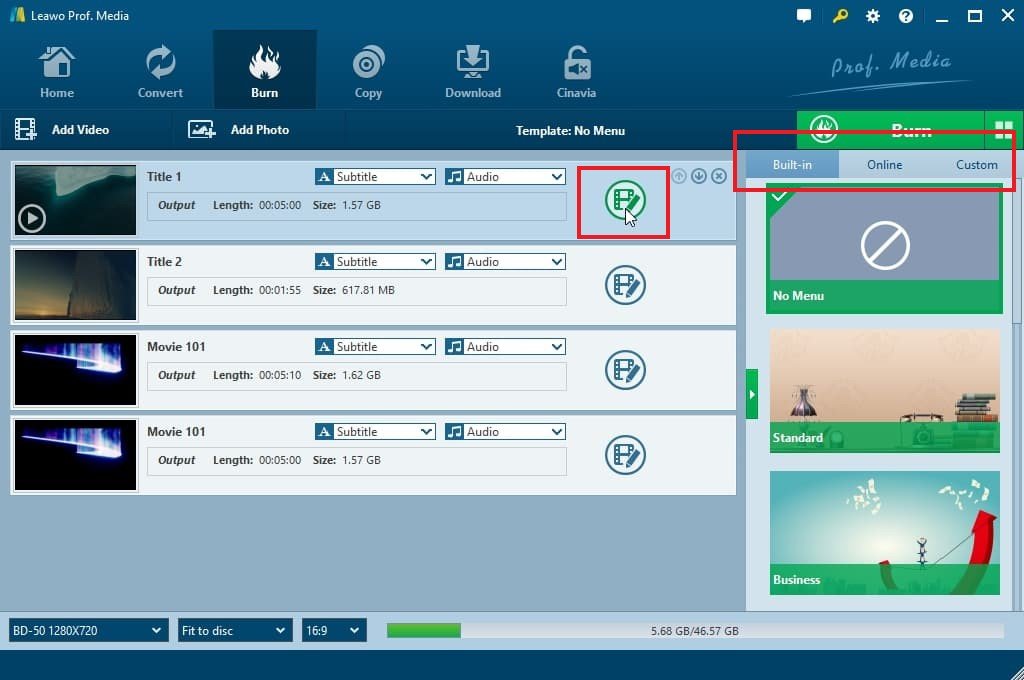 Step 5 Convert the MP4 video to a Blu-ray disc

Now, as everything is on set, click the Burn button. Under Burn to, choose the name of the current functional Blu-ray drive. Hit to start the process. 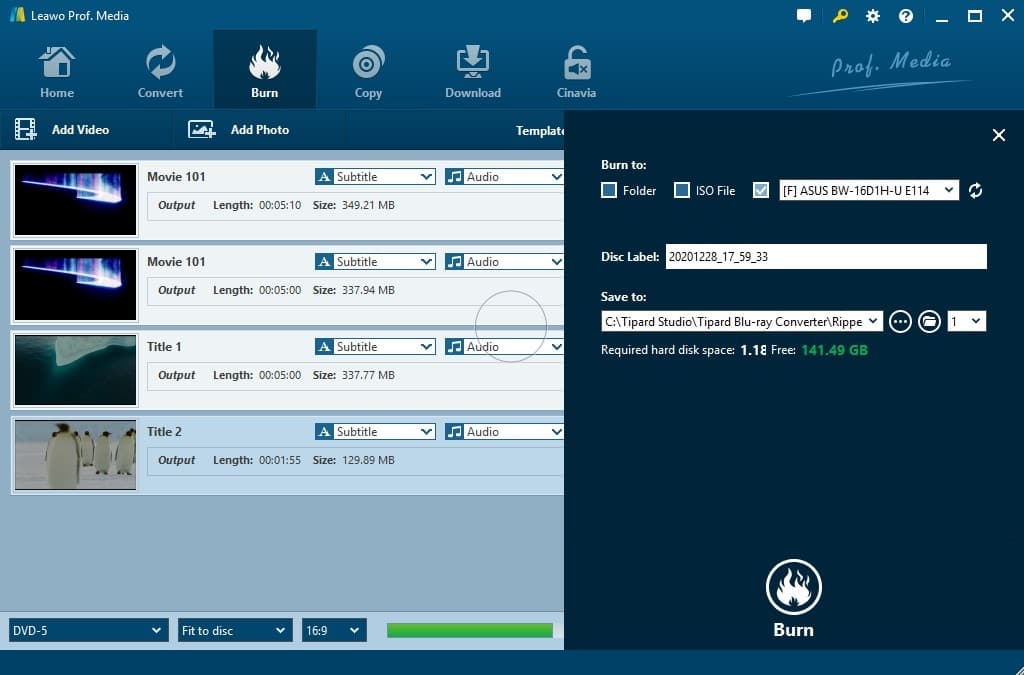 Note: You can also choose to convert the MP4 video(s) to an ISO file or BDMV Folder, two useful digital formats for transfer and backup. Holding all videos in one file, you can upload the ISO or BDMV Folder to the cloud or transfer it to a USB drive with ease.

Within minutes, Leawo will finish the burning and you may eject the disc. Remember to keep your disc away from scrapes, sunshine, heat, and other factors that may damage the Blu-ray disc.