Could I Connect A Blu-Ray Player to PC and How

“How to connect Blu-ray player to my desktop or laptop?”

Well, it depends on what kind of Blu-ray player you have.

Is it a standalone Blu-ray player (like Sony or LG) you want to use as an external disc driver for your pc, or you want to use these two devices to set up a DLNA server? Or it is just a Blu-Ray disk drive for the PC you want to mount to your computer.

If it is a Blu-ray player that needs a drive bay to be mounted to your desktop, or a slim external Blu-ray drive using a USB cable to connect to your laptop, then the procedure of connecting Blu-ray player to pc is simple.

You can follow the guide here to connect and set up Blu-ray player on your computer, then play movies with BD player or ripper software.

If your Blu-ray player is a standalone unit that is designed to play movies discs and output to a TV screen, and you want to use it as an external BD driver for your computer, then things may become very complicated due to several technical problems. The easier and more time-saving way is to get a Blu-ray computer driver and BD player or BD ripper software.

However, if you want to try it out of curiosity, you can check the “Feasibility Analysis of Connecting a Regular/DLNA Blu-Ray Player to PC” below and find the answer you need.

Or, assuming you have a desktop computer, you can also use an HDMI cable to connect the Blu-ray player to PC monitor if you like.

For home entertainment, you might looking for the solution to connect a DLNA enabled Blu-ray Disc player to a computer and stream media like music, video, and photos on your computer. Yep, these tricks are also included here.

1. Feasibility Analysis of Connecting a Regular Blu-Ray Player to Pc

Maybe you are wondering is there a way to connect your spare Blu-ray player to PC.

Well, in most cases, it will not function the same way as it would when connected to the TV in your living room.

And how about using an adapter that helps to plug Blu-ray into a USB port, or some video capture device to decode the signal output from the player?

It’s still a difficult job for you. And here is why.

The Crux of This Issue

Of course, it is possible to capture and re-display video via HDMI for the uncompressed video.

But you will need a Thunderbolt port to do the capture.

Because the data transferred via HDMI for a basic Blu-ray playing is about 4.9 gigabits per second (Gbs). The 4K bitrate can even go up to 20Gbs, which is beyond the ability of the USB 3.1 Gen 2 port to capture.

If you intend to make a compromise and accept a compressed video with a USB HDMI capture device, you will learn a hard lesson from this.

Because the HDMI capture device you can find will do on-board AVC encoding on its own. The bitrate of the compressed video transferred to the pc will decrease to around 100Mbs. That is too much to compromise.

That is impossible to have enough bandwidth for the AVC encoding. Because of your low-cost hardware which is not as good as a professionally made Blu-ray in encoding.

Normally, the outputs video of your Blu-ray player will be encrypted with HDCP (High-bandwidth Digital Content Protection), while the HDMI capture device is a recording device. That’s not legal to decode the HDCP signal. Also, some older video cards may not support HDCP on the VGA connection.

Is there an exception? How about connecting a DLNA Blu-ray Player to PC as an external BD driver for my Windows PC?

If you have enabled DLNA on your Blu-ray Player and you want to use it as a Blu-ray drive to your PC, then you can have a client on your computer, like VLC, which has the capability to perform as a DLNA client.

2. Connect Regular Blu-Ray Player to My Computer Monitor with HDMI

To connect a standalone Blu-ray player to a pc monitor is just about plug-and-play.

Though the annoying part about this is that you will need to change the source your monitor is showing currently, that is assuming that your monitor has more than on HDMI port.

If not, then every time you want to watch something through your monitor, you’re going to have to mess around with wire, unplugging the HDMI that connects to your pc and plugging it into your Blu-ray device. Creating more of a headache than its worth.

If you have more than one monitor for your computer setup, then you have the opportunity to watch your favorite movies on one monitor and continue gaming/working on the other monitor.

You May need an Additional Speaker

If you were to go down the pc monitor route and connect your Blu-ray device to a monitor to make this the source of where your Blu-ray player is going to display your films, you may also need a standalone speaker. This is because most monitors on today’s market, new and old, either come with no speaker at all or have a really, really poor sounding speaking integrated. So, if you don’t want your favorite films being ruined by poor audio playback, get yourself a quality set of headphones.

3. Connect a DLNA Blu-Ray Player to PC which is set as a DLNA Server for Home Entertainment

The DLNA (Digital Living Network Alliance) feature enables users to stream media files, like music, movies, and photo on their computer hard drive, to a DLNA supported Blu-ray Disc player through your network.

So, if you want your Blu-ray player to access the media from your pc or mac, including those media from iTunes or iPhoto, you will need to know how to connect PC to the Blu-ray player and set up the DLNA feature on a computer to share media file in this section.

First, you will need a working broadband connection with a router.

Then you can connect your Blu-ray Player to your PC/Mac through this router using network cables or wirelessly.

But using Ethernet cables to connect these devices is highly recommended. Because you can get the best performance and won’t be affected by radio-frequency interference.

To connect your DLNA Blu-ray player to PC correctly, just check the illustration below. 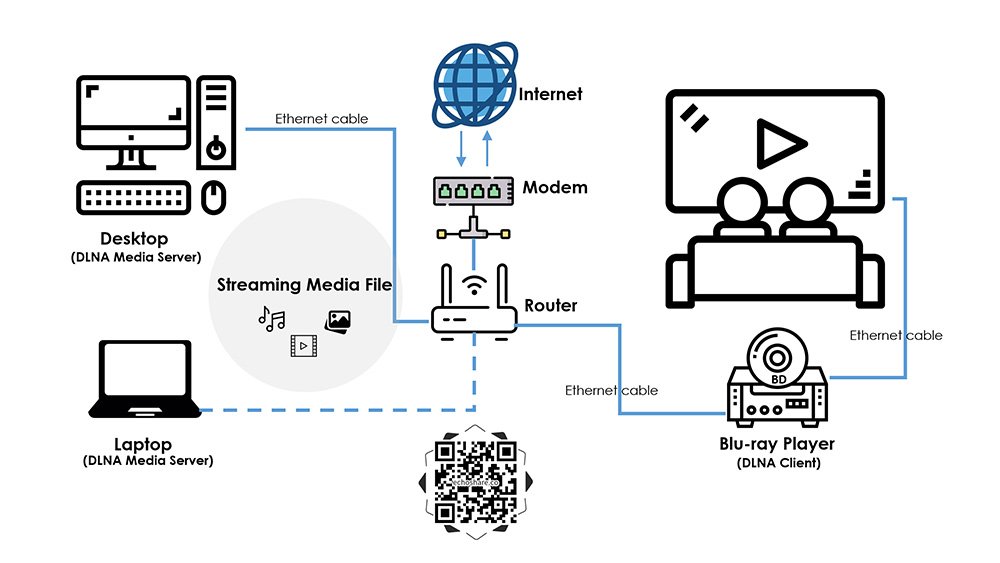 Set up DLNA feature on the computer

With your computer and DLNA Blu-ray player correctly linked together through the network, you can follow the steps below to set up the DLNA feature on the PC/Mac.

Alternatively, people can follow the manual of their BD player to enable the DLNA feature, especially for Mac users.

Most user’s manual of this kind will recommend a third-party software that can help you turn on the DLNA streaming feature on your computer.

4. Connect a Blu-ray player to PC and play movies with BD Player or Ripper Software

The best way to watch Blu-ray on your PC is to connect a Blu-ray computer drive to the computer and play with BD player software such as Aiseesoft Blu-ray player or Tipard Blu-ray ripper, which can save you all the aforementioned hassle.

By doing so, you will have fully interactive control of the playback. What’s more, it will bring the originally uncompressed video.

Connect and Set up a Blu-ray drive in your pc

Of course, an external Blu-ray player is easier to connect and set up, no matter for a laptop or a desktop computer.

Just plug it into your computer and install the driver software to get ready for the Blu-ray disc playing.

However, if what you got are an internal drive and a desktop, you will need a few extra steps to deal with the internal components of your PC.

Get a Blu-ray disc Player software

Below is the best Blu-ray player you can download and use.

This a super-powerful Blu-ray and Media player that can help you to play Blu-ray disc, Blu-ray folder, DVD disc, DVD folder, DVD ISO file, any 4K/8K/AVCHD/UHD/FHD/HD videos, as well as videos in MKV, MP4, TS, MTS, MOV, AVI with the resolution of 4K, 1080p, and 720p on your Windows PC and Mac.

To play Blu-ray disc on your PC:

Some Blu-ray drives come with a Blu-ray Player software named PowerDVD, which is not recommended.

Only after you use the Aiseesoft Blu-ray Player will you find PowerDVD can’t compare.

Alternative: Play Blu-ray on your PC by Ripping

If you don’t want to mess with the external drive, again and again, you can download and use a Blu-ray ripper which allows you to digitize your favorite Blu-ray collection on your PC/laptop. So you don’t need to carry discs and the external Blu-ray player with you if you want to watch films on the go.

You can just keep them in a tidy folder on your PC and run them whenever you please through the Blu-ray ripper software.