MKV to Blu-ray: One Minute to Burn Your MKV Video to A Blu-ray Disc

Featuring a perfect container multimedia format, the MKV format is nearly the perfect one for movie fans to see ultimate HD frames and for music lovers to enjoy crystal clear songs.

However, you can only play the MKV on a phone, PC, or tablet, sending the file from one device to another mobile device. As a Blu-ray player can only process Blu-ray discs, you can hardly stream an MKV file on your TV screen or stereo.

Nothing is impossible though, we still have one remedy to enable playback of your MKV videos on a Blu-ray player – to burn your MKV to a Blu-ray disc.

Through burning, you save the MKV file to a Blu-ray disc with zero quality loss, later you can just pop the disc into the Blu-ray player and stream the movie/music on a big screen, enjoying the full-featured frames and audio.

To do that MKV to Blu-ray conversion, follow the easy guide below and complete the burning in just one minute.

How to Burn Your MKV to A Blu-ray Disc

Actually, to do the burning from MKV to Blu-ray is pretty easy when you have the right tool – a computer with a powerful Blu-ray burner program. Also, remember to connect your Blu-ray player to the computer to load up the disc.

Tip: What is a Blu-ray burner program?

A Blu-ray burner program is the kind of computer software that helps you transfer the digital video, music, or other files from the hard drive to the optical Blu-ray disc. It will do the conversion from digital formats to Blu-ray format, so you don’t need to convert the MKV file to a Blu-ray compatible format prior to the burning.

There’re so many Blu-ray burner programs online, just type in “Blu-ray burner software” on your search bar, scroll up and down, find the one you like. Or, you can check out the reviews that some people made about these Blu-ray burning or authoring programs.

Here, I will use echoshare DVD Creator, a very easy-to-use Blu-ray burner, to show you the exact steps of burning the MKV to a Blu-ray disc.

Being a professional DVD and Blu-ray burner, echoshare is never a program that’s full of those brain-destroying technical terms and complex steps. With maybe just 4 or 5 clicks, you can finish burning your MKV to a Blu-ray disc.

Better still, you won’t suffer from any quality loss issues. Unlike some Blu-ray burners that downgrade the resolution of the source videos as they cannot handle HD and UHD videos, echoshare will burn your MKV with the original quality, subtitles, and audio to a Blu-ray disc. Nothing will be thrown away. 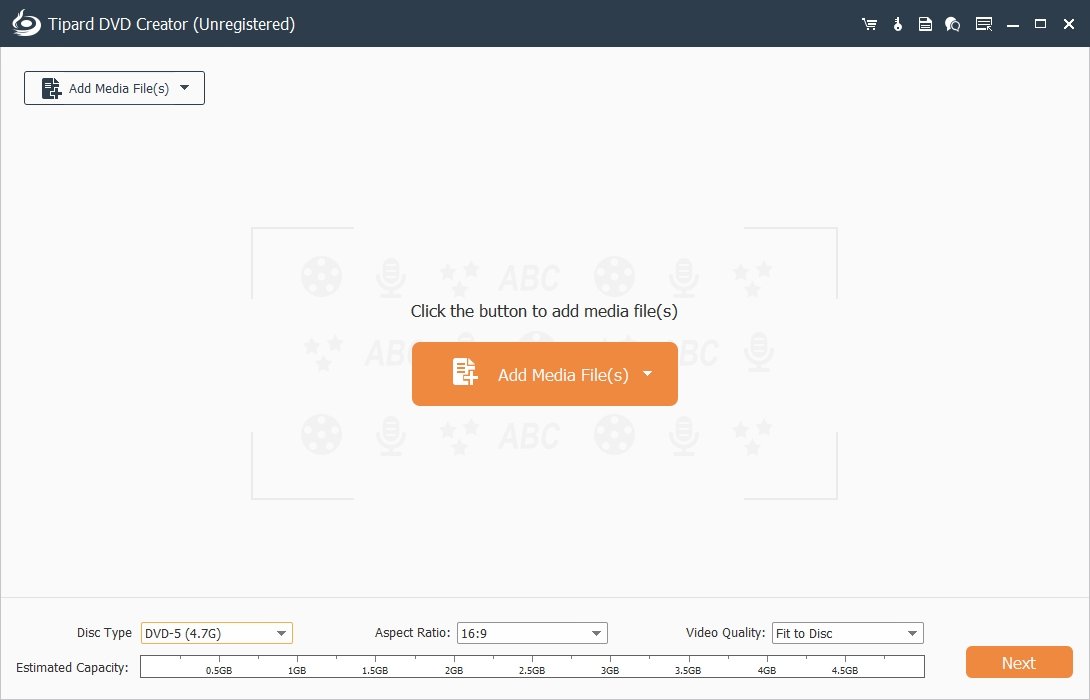 Oh, one more thing, if you dream to make a professional and stylish disc, this Blu-ray burner helps. By adding a disc menu, you can create a commercial-class Blu-ray movie disc at home without those expensive kits.

Tip: Can you customize a disc menu?

Sure thing. Except for the 100+ build-in disc menu templates, echoshare also allows you to customize the menu as you like.

Browse on your hard drive or search on the Internet, choose a nice photo as the background, set some beautiful melodies as the background music, get a perfect animation as the opening film (like the famous Leo the Lion of MGM), etc.

To know more about the program, you may download it and have a go.

Steps to burn MKV to Blu-ray

Now, pick up the echoshare DVD Creator, and let’s burn the MKV to a Blu-ray disc. Before that, get yourself a blank Blu-ray disc.

First thing first, insert the blank Blu-ray disc into the disc tray. Then, click on the related button below to download the Blu-ray burner software to your computer. Install it after the download.

Launch the Blu-ray burner on your computer and choose to burn Blu-ray disc. 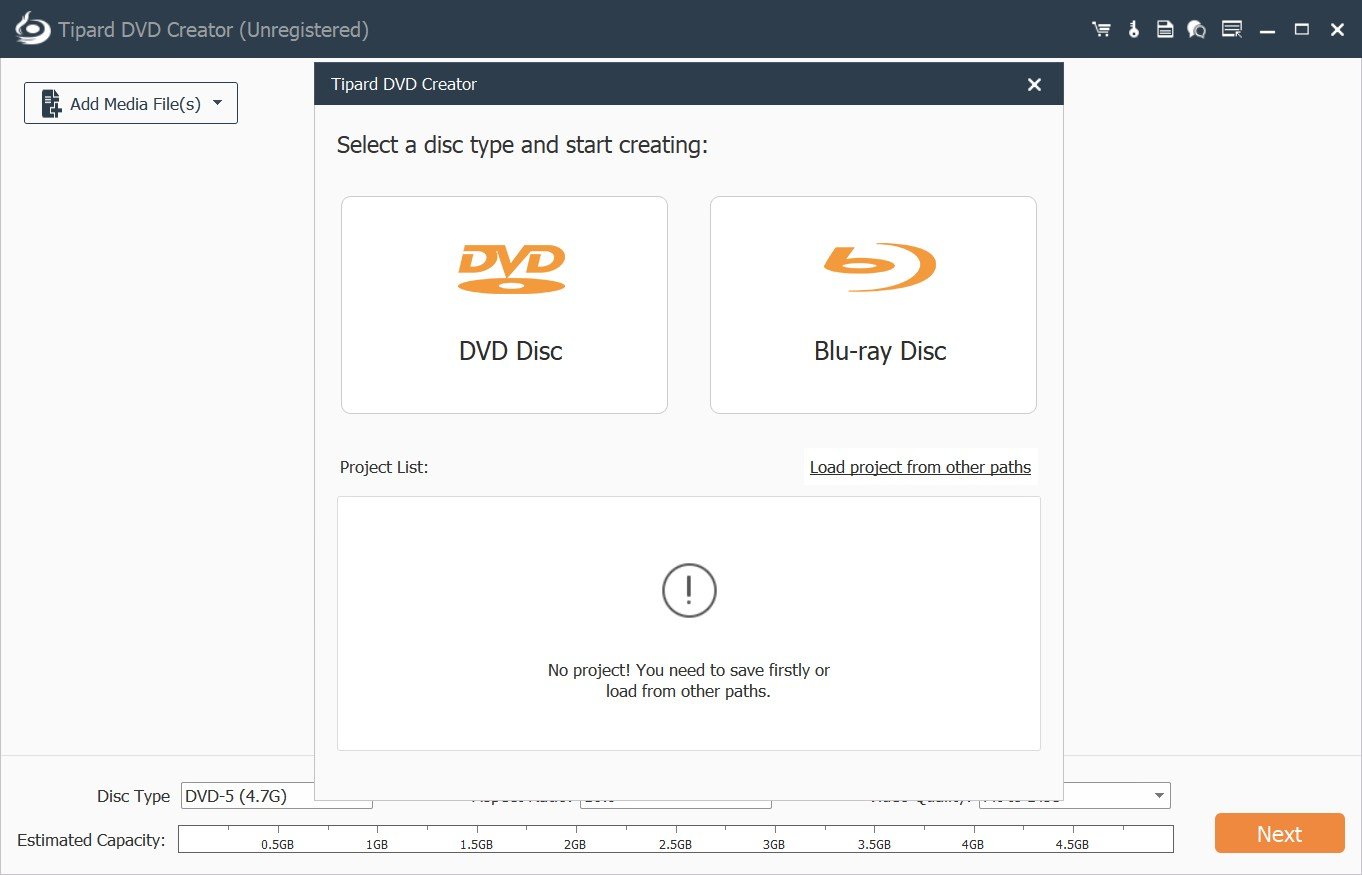 Click on the Add Media File(s) button to load your MKV file(s) to the program. For multiple videos, you can put them in a folder first, then choose the Add Media Folder option. Wait for a minute or two, the MKV video(s) will be displayed as the program finishes processing. 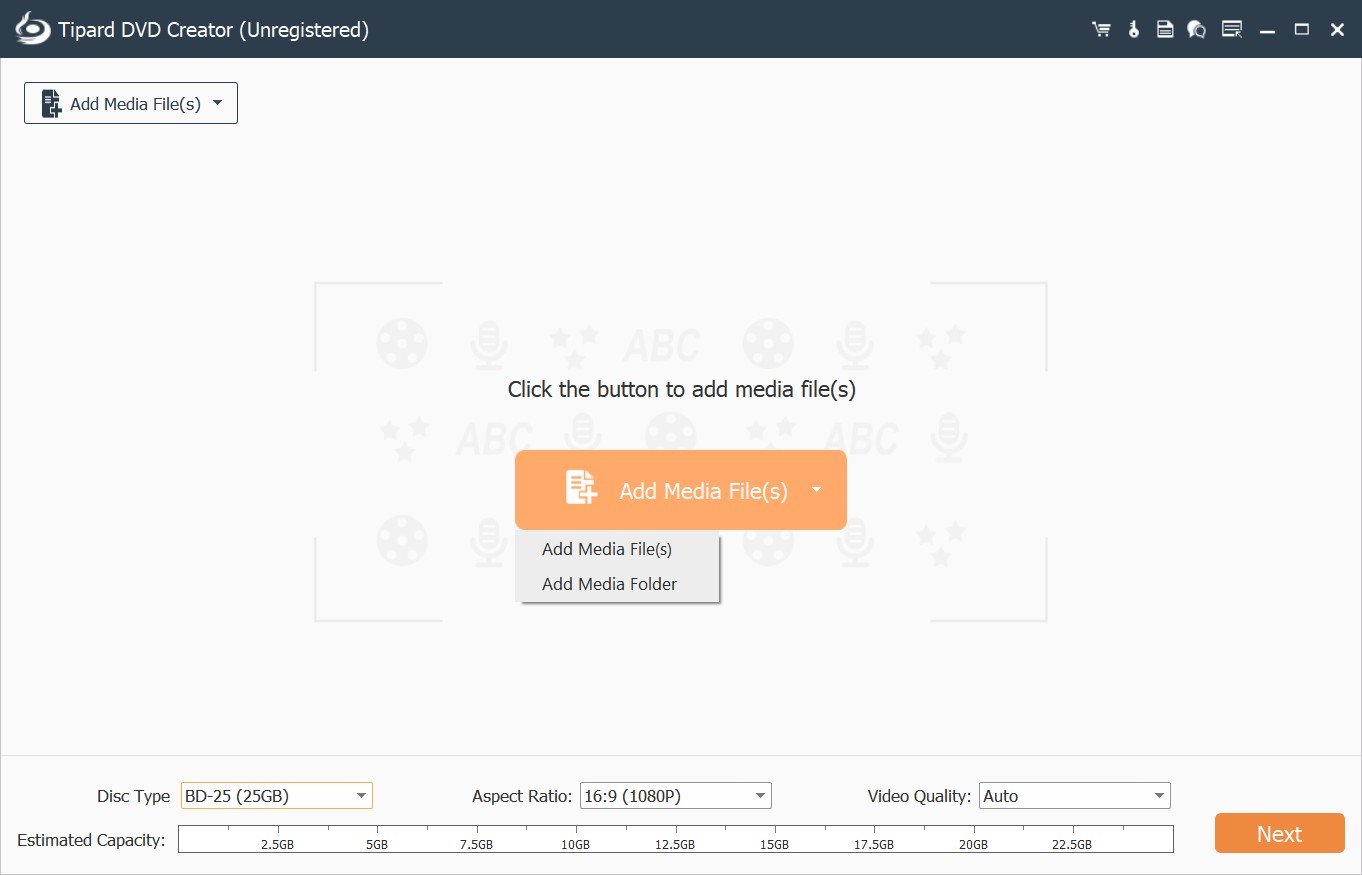 Next, let’s set up for the burning. 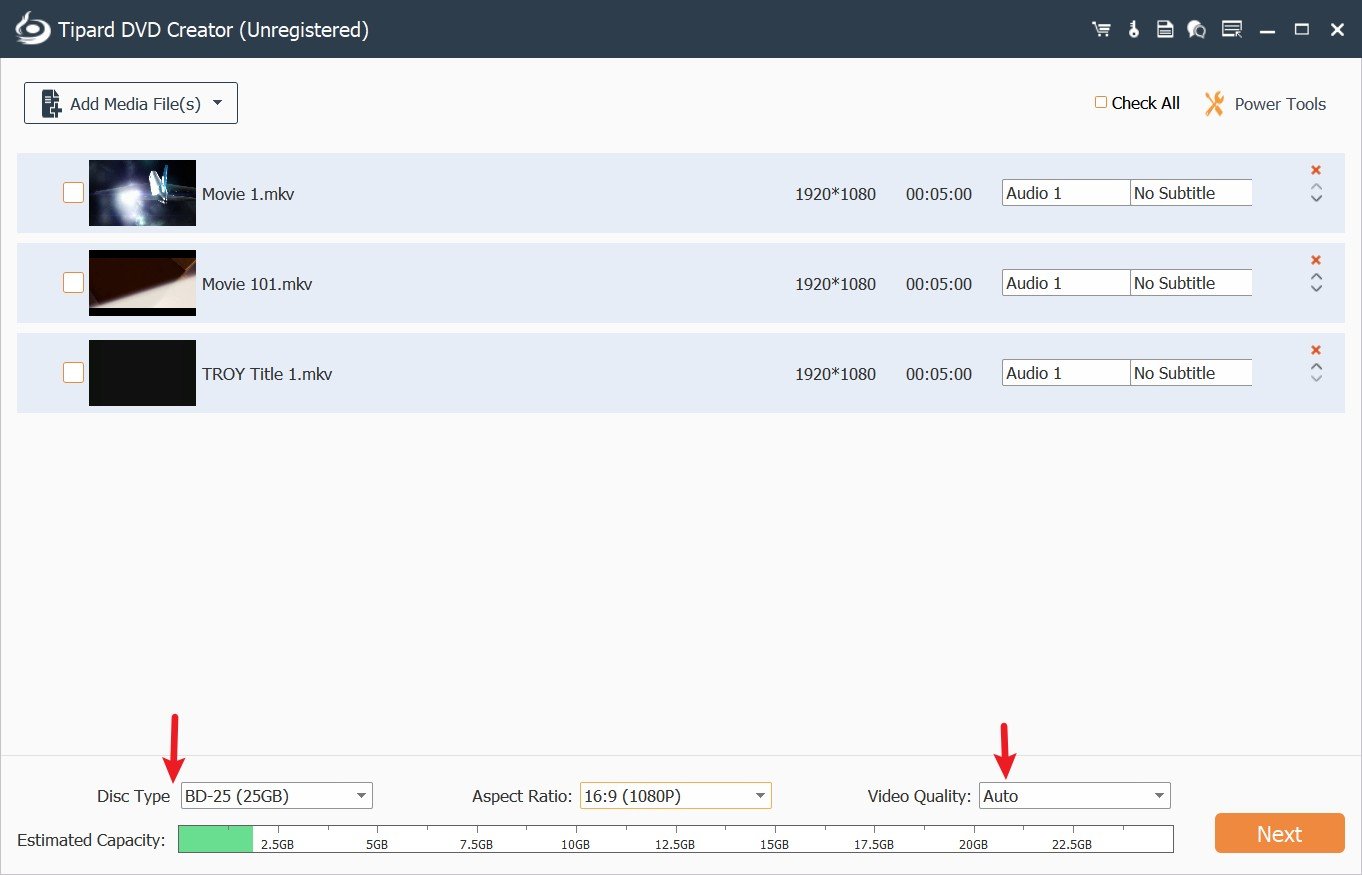 Now, we have come to the menu creator page. Here, you may choose one template from the provided categories. Or, you can design one by adding an opening film, background music, background image, etc.

Fancy an easy disc? Sure, click the No Menu option to disable the disc menu on your Blu-ray disc. Click Burn to proceed. 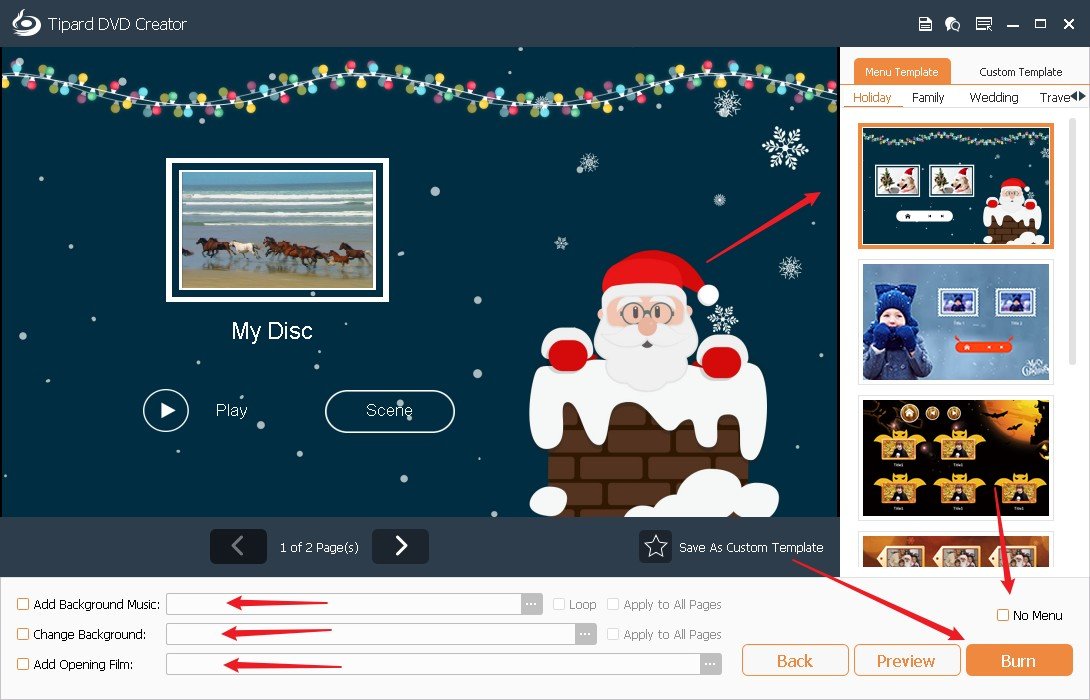 Lastly, click on the Burn button to initiate an MKV to Blu-ray burning. Wait for a minute or two, when it’s done, pop out the Blu-ray disc. Star to play it with your player and enjoy. 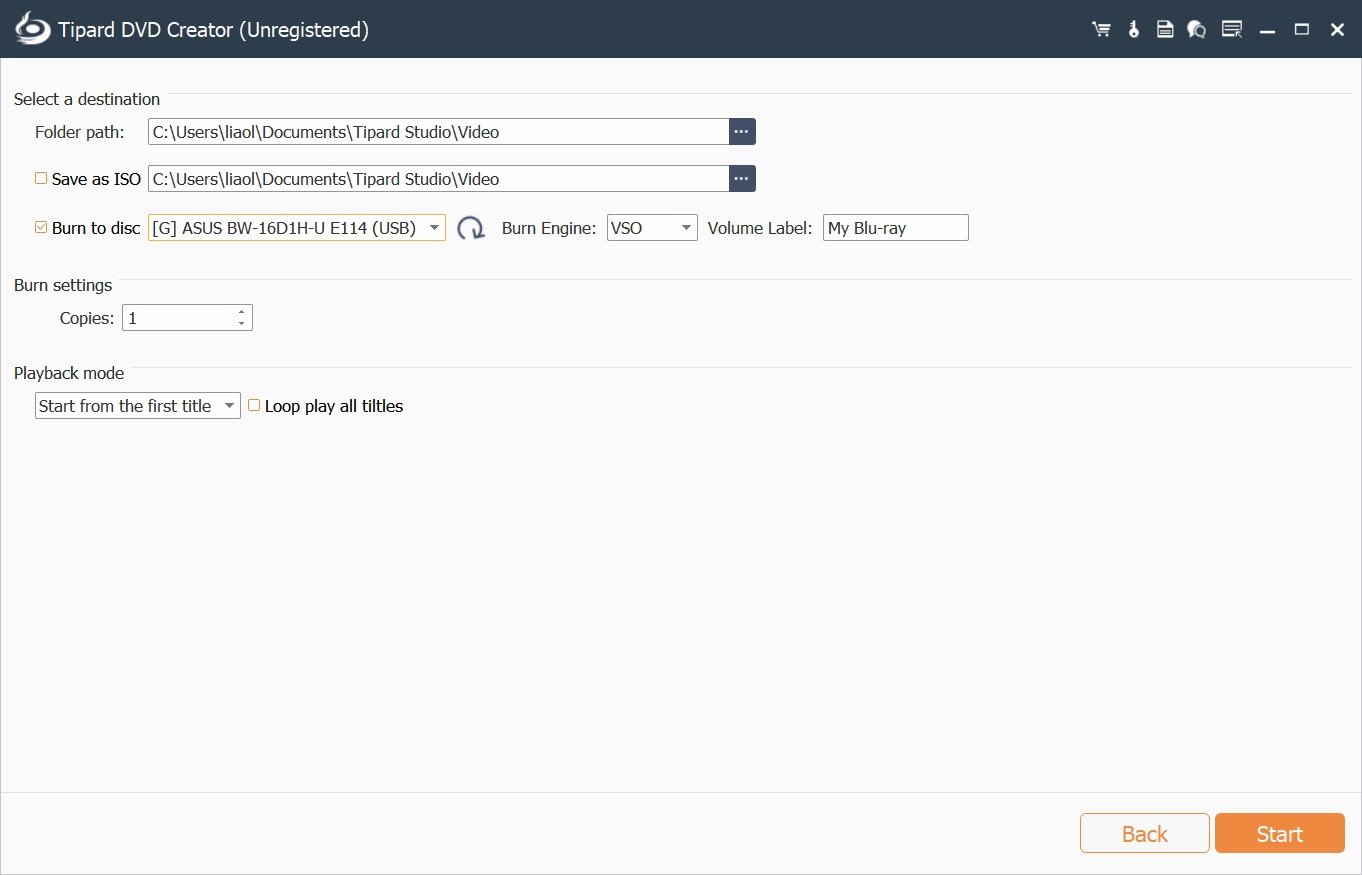 Can MKV files be burned to DVD?

Sure thing, no matter what format it is, you can always videos to a DVD as long as the DVD burner software can handle it. So, yes, you can burn your MKV videos to DVD.

Just pay attention that MKV files are generally some huge files that reach several or dozens of GBs. So, you’d better check the capacity of the DVD you’re about to use. And most importantly, if you want to know how to burn your MKV files to DVD, check the tutorial here.